Answer ALI. questions.   Marks allocated to each question are shown at the end of the question.  Show ALL your workings. Any assumptions made must be clearly and concisely stated.

RATES OF’ TAX (Including wife’s employment, self-employment and professional income rates of tax). Year of income 2017. 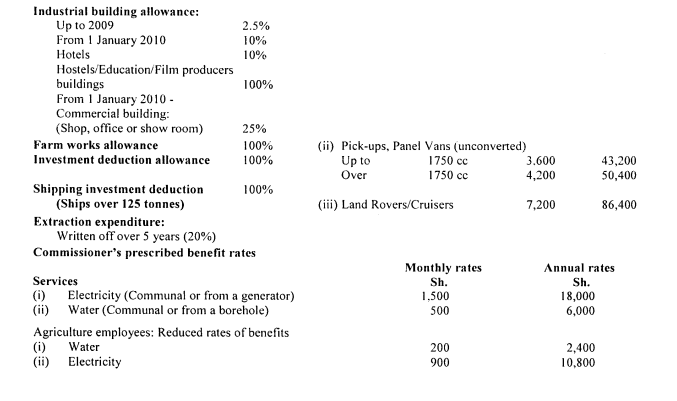 1.          When the Cabinet Secretary for the National Treasury or equivalent ministry presents the Division of Revenue Bill to Parliament. it should be accompanied a memorandum explaining various matters.

3.          Mwanahawa Hamisi is a trader dealing in fast moving consumer goods and electronics.  She is duly registered for value added tax (VAT). Details of her business transactions for the month of October 2017 were as follows:

(All the above transactions are quoted exclusive of VAT at a rate of 16% where applicable unless otherwise stated).

The value added tax (VAT) payable (or refundable to) Mwanahawa Hamisi for the month of October 2017.  (10 marks)

3.         Bonface Huka is a resident individual and a qualified pharmacist who has been employed Sawa Hospital since his early retirement from the public service in 2016.

The following details were availed to you in respect of his earnings for the year ended 31 December 2017:

2.         Zuret Products Ltd. which is engaged in the business of manufacturing and selling of canned fish commenced its operations on I January 2014 after incurring the following expenditure:

Details of property, plant and equipment schedule reflected the following as at 31 December 2017:

1.          Highlight four circumstances under which duty paid on imported goods may be refunded the commissioner. (4 marks)

3.         Chege and Telek have been partners trading as Chetel Traders.  On 1 September 2017, they admitted Lopez in the business and changed the partnership name to Chetelop Traders.  Prior to the admission of Lopez, the profit and loss sharing ratio was 2:3 between Chege and Telek respectively.  However, with the admission of Lopez, they revised the profit and loss sharing ratio to 2:3:1 for Chege, Telek and Lopez respectively.

The partners have presented the following income statement for the year ended 31 December 2017: 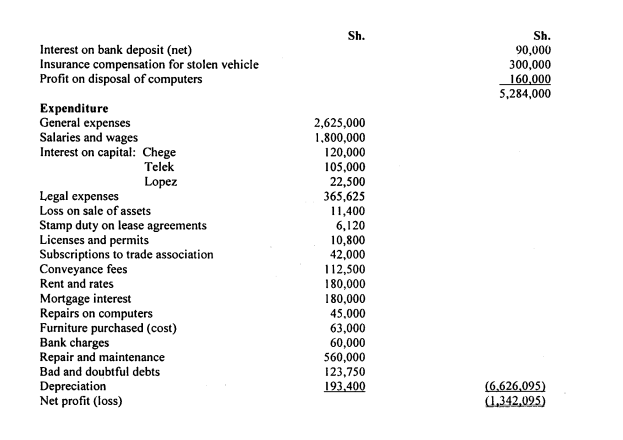