– a micrometer screw gauge (to be shared)

– a Vernier calliper (to be shared)

– a stand boss and clamp

– a source of light

(a) Using a micrometer screw gauge, measure and record the diameter of the wire labelled M(1 mark)

(b) Using wire M, make a spring as follows: (i) Use some sellotape to ﬁx one end of the wire M (about 2 5 cm) along the glass tube

(c) Remove the sellotape and release the spring from the tube. (The spring will slightly unwind and some turns will disappear)

Bend the free ends as shown in ﬁgure 2.

(d) Using a venier callipers, measure and record the external diameter D of the spring. (1 mark)

(e) Suspend the spring and a 50 g mass from a retort stand as shown in ﬁgure 3. 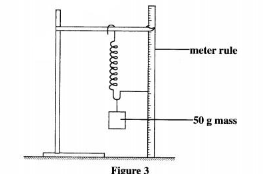 Count and record the number of turns N of the suspended spring. ( l mark)

(i) With the spring still loaded with the 90 g, pull the lower mass slightly downwards and let go so that the mass oscillates vertically. Record the time t for 20 oscillations. Hence determine the period T.

where m is the mass in kg on the spring. (2 marks)

(l) Adjust the position of the lamp on the metre rule so that its centre is a distance u = l2 cm from the beaker. Switch on the light. Adjust the position of the screen until a well focused vertical line (the image of ﬁlament) is formed on the screen. Measure and record in table 1 the image distance V between the screen and the beaker. (m) Repeat part (1) for other values of u shown in table 1 and complete the table.(4 marks)

(0) (i) With the meter rule outside the beaker, measure the height h of the water meniscus above the bench. (1 mark)

(ii) Determine the value of P given that (1 mark)

(iii) Hence determine the value of f given that to one decimal place.(2 marks)

– a wire labelled L mounted on a millimetre scale

– a micrometer screw gauge (to be shared)

(a) Using a micrometer screw gauge, measure and record the diameter d of the wire L.

(b) Place the two cells in series in the cell holder and use the voltmeter to measure the total electromotive force (emf) of the battery. (1 mark)

(c) Starting with the switch open, connect the circuit as shown in ﬁgure 5. P and Q are points on the wire L such that PQ is 60 cm. (PQ should remain 60 cm throughout the experiment) N is a point on the wire such that PN is 10 cm (0.1 m). 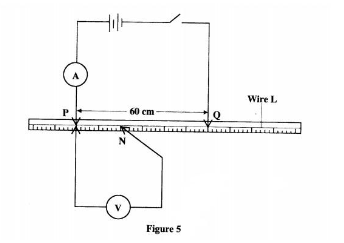 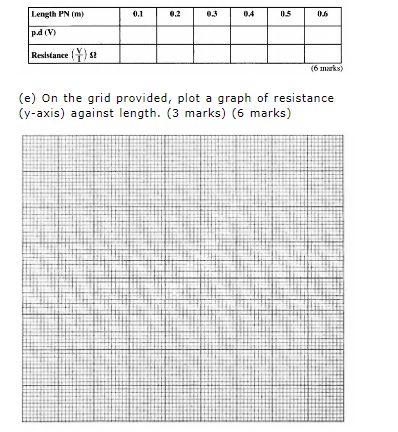 (f) From the graph, determine:

(ii) the constant k and its units given that (3 marks)

(g) Determine constant t given that