1. Provide for arithmetical check on the postings made in the individual accounts (either in the sales ledger or purchases ledger.)
2. To provide for a quick total of the balances to be shown in the trial balance as debtors and creditors.
3. To detect and prevent errors and frauds in the customers and suppliers account.
4. To facilitate delegation of duties among the debtors and creditors clerks. 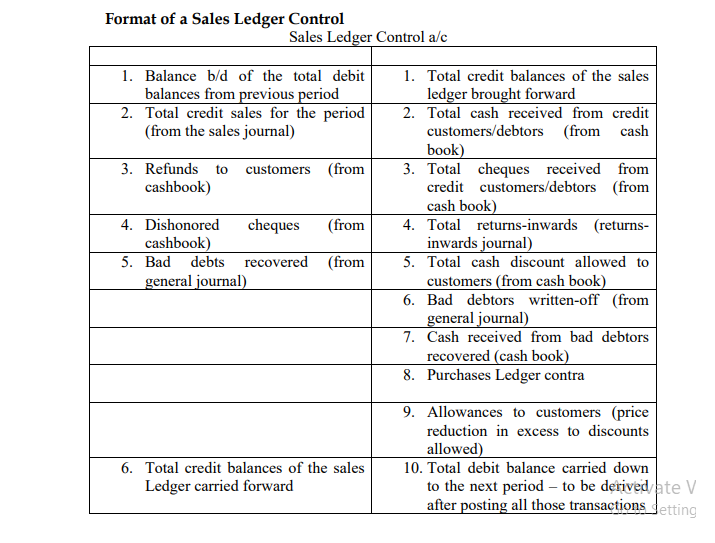 Sometimes a firm can refund some cash on the customers account. This takes place when there is a credit balance on the debtor’s a/c and the customer is not a creditor too.

The entry will be:
Dr. Debtor’s a/c
Cr. Cashbook

Contra against the purchases ledger balances:
Some debtors may also be creditors in the same firm and therefore, if the amount due to them as creditors is less than what they owe as debtors, then the credit balance is transferred from their creditors a/c to their debtors a/c as a contra entry.

Notes:
The following notes should be taken into consideration:

1) Cash received from cash sales should not be included in sales ledger control a/c.
2) Only cash discounts (allowable & receivables) should be included. Trade discounts should NOT be included.
3) Provision for doubtful debts is NOT included in the sales ledger control a/c. i.e. increase or decrease in provisions for doubtful debts will not affect this account.
4) Cash purchases are NOT posted to the Purchases Ledger Control A/C. However in some cases it can be included especially where there are incomplete records (Topic to be covered later).
5) Interest due that is charged on over due customers’ account may also be shown on the debit side of the sales ledger control. However when trying to determine the turnover under incomplete records then it is wise to omit it.